I am departing today for Brisbane where I will be residing at Dhammagiri Monastery until March 14, 2014.
Originally Ajahn Dhammasiha, the resident Abbot, invited me to fill in for him while he was away leading a pilgrimage to the Buddhist Holy Sites in India. Unfortunately this was cancelled, however, Ajahn Dhammasiha extended the invitation so that he could have some personal retreat time over that period.
This was also suitable for me to be able to spend some quieter time working on a book on the Five Hindrances with a possible printing date for 2015. Since I will be traveling in Europe this Spring, a month of intensive book writing and a visit with the very devoted monastery supporters seemed like a good opportunity.

The monastery does not have internet access but I am able to arrange some limited use. Otherwise information and news is posted on their website: www.dhammagiri.org.au

Wishing you all a Happy Chinese New Year (January 31) and a Joyful Magga Puja (February 14).
Posted by Tiradhammo at 7:27 PM No comments:

The Space to Doubt 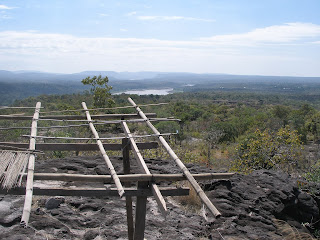 View from the meditation platform on top of Nibbana Cave.

I am now staying in the Nibbāna Cave near the top of Jom Gom Hill. I am not sure if the name refers to the possibility of Nibbāna for those staying there, or whether it means that the cave itself is 'nibbanic' in quality. On the worldly level the cave is indeed at least 'heavenly' as far as caves go. There are no bats, no ants, few mosquitoes and very pleasant temperatures between 20C and 26C, with even occasional gusts of cool wind. The cave also includes a meditation platform with spectacular views over the surrounding countryside and down the Mekong River. It is a one-hour sunny walk up and a 50-minute stroll down through a star-filled sky. But the most notable aspect is that it is unbelievably quiet. Mostly there is only the rustling of leaves in the wind or occasionally the distant hum of the Mekong rapids. When the wind stops there is only the sound of the mind. 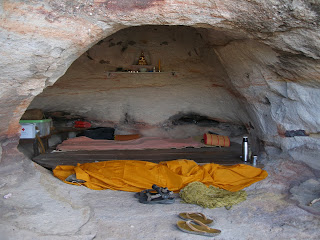 The Nibbana Cave, with wind guard down.

Unfortunately, I will only be here for a short time before visiting Wat Nanachat and Wat Pah Pong for the annual Luang Por Chah commemoration events and meetings; then it is back to Bangkok for more dental work. At the end of January I will travel to Dhammagiri Monastery in Brisbane for six weeks.

A question which keeps returning is the effect that living close to nature has on the mind. While we each try to maintain a certain stable emotional environment, nature has a wide range of expressions (hence we try to buffer ourselves from its extremes). There are so many things to be aware of: changing weather conditions, variations in the landscape, various insects to avoid or be wary of, certain plants which have thorns or protruding branches, loose stones or slippery dry leaves, the occasional dangerous creature, etc. Living exposed to nature's varied expressions thus requires a heightened degree of mindfulness and clear comprehension, as well as resilience so as to be prepared for the unexpected changes and to weather them with some degree of composure. When staying in especially scenic or unusual places, one is drawn to being more attentive to the environment. This brings forth what I call the 'sense of wonderment', a mixture of awe, intensified interest and a curiosity of inquiry. Sometimes there may be a tinge of fear when the curious inquiry slips into uncertainty or doubt, for example when standing on the edge of a steep drop. The effect of wonderment is a focusing of the mind, an energizing of body and mind, a humbling of grandiosity, and sometimes a stirring of questioning or reflectiveness upon the meaning of life: all supportive qualities for meditation. 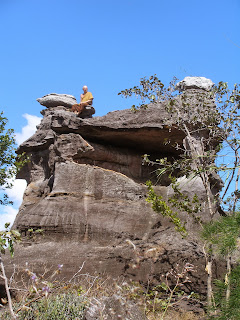 Another related effect is the distortions of time which can be caused by travelling through spectacular scenery. I am usually fairly good at judging time. However, sometimes when I have journeyed back to the cave after one of my exploratory excursions through the rock ledges and ravines, I have noticed a severe loss of time perspective. I put this down mostly to becoming absorbed in the scenery. This effect is similar to experiences of meditative concentration: the more the subject absorbs into the (meditation) object, the less 'subjective' it feels, for example, relative to time, place and familiar habits. Taken to the extreme of complete absorption, 'subjectivity' becomes entirely lost in unitary consciousness. Some people can be transported 'out of themselves' through seeing exceptional scenery or through intensive activities in nature. One evening as I stood on the stark plateau amongst exotic rock formations, with the setting sun transforming the horizon into a radiant golden glow, the thought arose that I could just as well be on Mars, the scene being so unworldly. A skilled rock climber I knew in England said that when all goes well, he and the rock become one. The limitation of these experiences is that subjectivity is transcended only temporarily, and they can also become something which feeds the ego, since they are still mundane experiences. 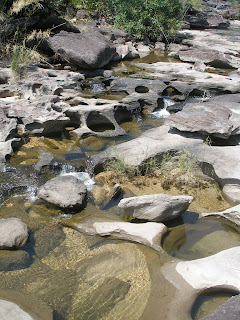 As well as inducing concentration,the experience of off-trail exploring also requires increased mindfulness and a constant reflective re-orientation. Nature is just the way it is, and is in continuous dynamic change. When we truly tune in to Nature we need to tune out from our obsessive self-reference. Then we can sometimes approach the experience of Suchness, being totally relaxed and present with the way it is: just these sights, sounds, smells, tastes, sensations and thoughts.

We can also learn a lot from Nature. In the process of opening to the diverse expressions of Nature, we suspend and can even throw off our old, habitual ways of being. This may be one way to lessen the hold of familiar habits which keep bringing us back to the theme of our 'old self'. Through challenging our old self with new views, we learn to take our own views less seriously and sometimes to see how limited they actually are. We each have our own personal 'view on life', and often forget that it is only one view. Step to one side and there is a different view, sometimes even a better view.

Our old self is held together by our habit tendencies and is reinforced by what the Buddha called the 'underlying dispositions' (anusaya). I am particularly interested in these tendencies, which I have previously referred to as 'classic hits' (October Blog), as they are the hardest to hear since they are often just playing softly in the background; yet they are very significant in directing life.

For example, during this retreat I became more aware of doubt as an underlying disposition. I know something about doubt as one of the Five Hindrances, and have some experience of working with it. However, recognizing it as a fundamental underlying disposition which is always functioning in the background was quite a sobering revelation. It's not that I have the same kind of paralyzing perplexity or numbing confusion which I associate with doubt as a hindrance. This underlying form of doubt is much more subtle and insidious. It manifests as a form of not believing certain aspects of experience, which energetically expresses itself as not surrendering or fully letting go. There is sometimes a palpable holding back or hesitancy, a 'not-sureness' in my approach to life.

This non-believing and holding back is worth investigating, as it brings me to the edge of conceit or where 'I am holding on'. And there can be quite a bit of arrogant identity in not believing - 'I don't believe that'. Some aspect of 'me' obviously believes in my non-believing. Some aspect of self is holding on. Is this the rationally-conditioned self? And what belief, view or attitude is supporting this?

One aspect is that I believe there is some wisdom in non-believing as well. Believing too easily may disguise an intellectual laziness to investigate more thoroughly, or an emotional need to believe due to underlying insecurity. I am especially wary of the 'herd mentally', 'fadism' or 'cultism'. When something becomes fashionable or someone becomes popular, I notice my reservations increasing. Some views are so well-packaged or presented so skilfully that they can seem irresistible. This is particularly noticeable when emotional issues are presented in some pseudo-reasonable form. The underlying emotions high-jack the supposedly reasonable discussion, giving birth to 'fuzzy' or 'fudgy logic', and the basis for wise reflection is lost. I have also seen the damage resulting from unreflective belief: defensive righteousness, confused and disillusioned followers, the anger of betrayal, etc.

This doubting tendency is amplified by being in Thailand, where one hears about many things which give occasion for doubt. People speak openly about ghosts, celestial beings, 'mystical beings' such as nāgas and spirits of deceased people, as well as psycho-normal events and the special powers of certain monks. When I first heard about them I would dismiss them immediately as superstition. However, at one point I realized that this attitude was very arrogant, and was actually due to the fact that I myself had not had any such experiences. Other people considered them to be true. For these kinds of experiences my doubting now manifests as 'don't know' or 'could be' rather than outright dismissal. 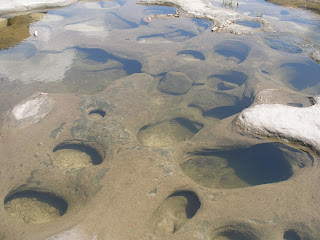 Ideally non-believing can allow some reflective space to consider things more widely and deeply. Holding back to give some space for reflection may not sound all that bad; however, the real issue is, 'What aspect of self is holding back?'. There is often some fear there, perhaps basically the fear of being overwhelmed, but also fear of being drawn into something which is hard to get out of. It is often harder to let go of a view than not adhere to one in the first place. Is this flexibility or indecision?

Doubt is transcended at the first level of awakening. This does not mean that one then simply believes everything. Rather, as with all the 'defilements', a major transformation takes place. Some forms of doubt, such as of the teaching or the practice, completely fall away. Other forms of doubt become transformed into wisdom. Everything has some element of truth to it. Wisdom is the ability to discern what that element is. Thus some things ought not to be believed, some things should be further considered and some things are worth believing or having some confidence in until we know the truth of them directly for ourselves. Ideally, we then gain some experience in maintaining the skilful balance between the Spiritual Powers of 'knowing wisdom' and 'faith in the not-yet known' which leads on to ever-deepening insight. 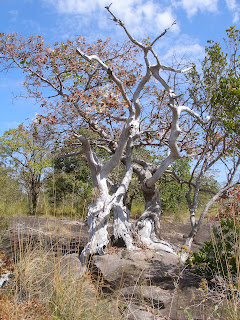