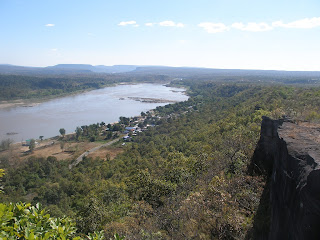 As usual at this time of year; I have been spending much time in retreat mode in the quiet branch monastery of Wat Poo Jom Gom, close to the Mekong River. Most of the time I stay in a small cave near the top of the 'mountain', about 1 ½ hours walking distance from the main monastery complex. The principal benefits of residing here are the experiences of solitude and silence, and the possibility of spending much time in nature, either walking through the expansive national park or sitting quietly in a shady remote place. The simple, natural lifestyle makes for a very physical experience, helping to settle the mind into the present moment.

The cave is a specially protected environment, warm in the cold and cool in the heat, sheltered from the strong sunlight, rain and wind. However, I spend most of my time outside, enjoying the fresh air and some degree of sunshine. The 'winter' in Thailand is known as the cold season and is also the dry season, usually with little or no rain from November until April. 'Cold' is, of course, relative here. When the temperature drops below 20C it is 'cold', mainly because the houses and clothing are designed for the normally hot weather during most of the year. The north-east of Thailand also experiences a cool northerly wind, giving a significant wind-chill factor (especially in thin and sparse clothing).

Fire Fighting
The dry season is also the burning or 'fire season', when farmers burn off the remnants from various crops, rice stubble or the unused parts of the tapioca plants. Some of them, however, are maliciously lit in the National Park, either to clear off grassy meadows for cattle grazing, burn the leaf litter for mushroom gathering or force the bamboo to send out new edible shoots. 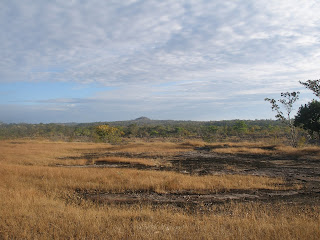 This year the fire season began unusually early. Already in December fires were ignited in the meadows near to the monk's huts. In early January several fires were lit to the east of my cave. Fortunately, since I was nearby and saw them early, I was able to extinguish them before much damage was done, although one of them got into the grassy meadow and scorched a large area. Both times I had just finished making my evening hot drinks and showering before retiring to the meditation platform on the top of the outcrop. This provides a 360-degree panoramic view down the Mekong River and across to the mountains of Laos. Unfortunately, it also gives a bird's eye view of any fires burning for many miles around, and in the dry season there are usually many, so the view is often obscured by the low-lying smoke.

Most of the fires burn slowly through the leaf litter, but once the fire gets into the tinder-dry grass of the meadows, there is little one can do, especially when it is fanned by gusting winds. For the fire in the meadow, the most I could do was scout downwind ahead of it (with smoke choking my lungs and stinging my eyes), and try to prevent it passing beyond the patches of rock which act as natural fire-breaks. Only where the flames were creeping against the wind or much reduced by sparse vegetation could I actively try to extinguish it. I soon discovered an effective method by patiently waiting for the wind to briefly die down or blow against the fire, then sweeping the flames towards the burned-out patches, or snuffing them out with my broom. I slowly worked my way along the periphery of the fire, painstakingly extinguishing every flame until I reached the furthest edge against the rocks. Then, with the last snuff of flame, it was suddenly totally dark! I stood there in silence and darkness for some minutes, until my eyes gradually adjusted to the faint starlight and I could see the expanse of the blackened meadow with the last few glowing embers scattered about. Fortunately, I had brought my headlamp with me from the cave, although it was a hundred meters across the meadow, safely placed on a large rock. A few stumbles and scratches later I recovered the lamp and made my way back to the cave.

Shortly after I returned from the Ajahn Chah memorial ceremony and a brief trip to Bangkok, the burning season took a more serious turn, with someone setting multiple fires around the adjacent area. One of them I only saw by the orange glow through the trees as it was growing dark. In the darkness it was hard to determine precisely where it was, but upon closer inspection I saw that there was a whole series of fires burning up the side of the opposite mountain and down in a nearby valley where there was one of the unoccupied caves. Although it seemed far away and was already quite dark, I decided that I should investigate further. A short scramble straight down the rocky hillside soon saw me involved in a two-hour marathon extinguishing fires in five separate places, although I had to give up on the biggest and most dangerous one which was blazing through the bamboo between massive blocks of stone. After two hours I was so exhausted that I could barely drag myself back to my lodging at the main hall for a drink of water, a cleansing wash and much-needed sleep.

I remained at my lodging in the main hall the next day to recover my strength. Then the following day, as I trekked back to my cave, I noticed a pall of smoke rising very near to my destination. By the time I arrived at my cave the adjacent forest was alight and streams of smoke were billowing across the plateau. I quickly extinguished the nearby fire, but then realised that it was spreading down the slope in all directions. Some three hours later, numb with exhaustion, hoarse from smoke inhalation and trembling from aching muscles, I crept back to my cave with just enough strength remaining for some drink, a wash and a long sleep.


Aliveness
One of the benefits from living close to nature for some length of time is that our senses begin to wake up. Especially if we are living in a rugged natural environment, we need to be continuously alert – to the changing environmental conditions, to potential danger and to our own physical situation. The main benefit of this is that we abide in the present moment much more, even though it may not always be comfortable. Our senses interact with sense impressions immediately and more simplistically than the conceptual mind. Thus we can also notice more easily when we do get lost in conceptualizing.

In contrast, when we live in a familiar domesticated environment our senses often go to sleep, since we do not need to use them so intensely. For example, towards the end of December, due initially to knee pain, I spent a few days staying in the guest hut beneath the sala. This was much more comfortable than staying in the cave, as I could close all the windows and be out of the cool wind in a consistently warm environment. I noticed, however, that with the reduction in physical sensation, as well as the sound of the wind, I was more often in my own head, with focus on thoughts rather than physical sensations. And many of those thoughts were concerned with plans for the future and memories of the past. When I wanted to know what time it was, I had to look at the clock rather than consult the direction of the sun or moon. The extreme, of course, is living in a busy city, where our senses often need to shut down due to being overwhelmed by stimulation. We are then forced even more to take refuge in our own minds, and when we find that unpleasant, to seek for distraction in amusement or entertainment.

Living in the present moment with the impact of sense consciousness can be very peaceful and mentally quieting. There is just this present moment experience, with no need to think about or elaborate on it. Also, we can use this occasion to observe the effects of sense stimulation on our changing moods. Some impressions are pleasant and attractive, and we may notice a tendency to want to hold on to them. Or they may trigger off memories of previously pleasant impressions. Most sense impressions are fairly neutral and we notice that they do not excite interest or revulsion. Here at Poo Jom Gom much of the scenery is unthreateningly unusual: strange rock formations, unordinary vegetation, unique patterns in the rocks, gnarled and twisted trees, etc. This can create an unusual state of mind – open and curious, yet silent and calm. 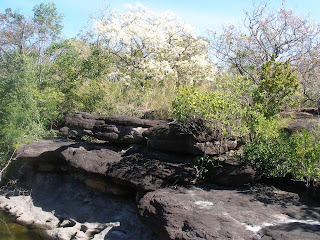 A Simple Life
Why did the Buddha recommend a simple lifestyle as a skilful basis for spiritual practice? The basic principle is that we have limited mental energy, and whatever we focus on has a strong influence over our being. If our attention is preoccupied with non-spiritual affairs, there is not much available for spiritual practice. This is also the basis for the stress of everyday life which challenges many people – they try to focus on some task, but much of their attention is distracted or diminished by other affairs which draw their attention. This could be some other task (if they are multi-tasking), some emotional conflict, or even some unresolved emotional trauma largely buried in the unconscious. If we at least do not over-burden our attention with a load of trivial mundane life tasks, we may begin to unpack the other sources of attention leakage and learn to patch -up these leaks. 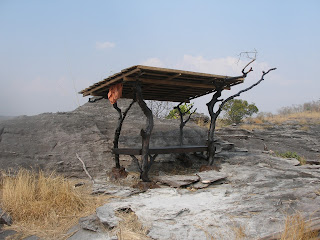 Ajahn Chah Ceremony
Of course, the main event this time of year is the Ajahn Chah Memorial Ceremony in mid-January. And this year was an especially memorable occasion, marking the 100 years since his birth. Thus many of the branch monasteries made an extra effort to attend, arriving with a number of monastics and lay-supporters. Since I am normally in Thailand at this time of year, I decided to make the accommodation space at Wat Pah Nanachat available for visitors and only arrived for the last day of the event, January 16th. Besides the official events, there was also time for reconnecting with others from distant places.
Here are the links to the event (from last year) and the talks given this year:

The Uncertain Future
Generally, my longer term plans are to spend more time in Australia, principally at Wat Buddha Dhamma, north of Sydney. Ajahn Khemavaro has offered to sponsor a two-year work visa for me, so presumably I should be there to work! Hopefully this will include work on my on-going book on 'I-making'. The application for this visa was more complex than first thought. Besides the mandatory health check, I also needed police clearance certificates from Australia, New Zealand and Thailand, due to having for extended periods in those countries. All this necessitated two extra trips to Bangkok (one was just overnight) and then return to PJG. However, it was not in vain and the visa was issued on Feb. 23rd in time to book a flight to Sydney with Ajahn Khemavaro.

Wishing you all progress in the practice and a rewarding New Year. 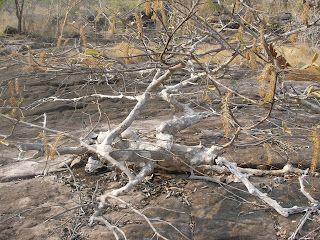 Posted by Tiradhammo at 10:21 AM No comments: