I arrived here on May 31st after spending a few days with John and Hanna in the Tweed Valley, northern NSW. A small but very interested group of people participated in a day workshop on May 28 and a slightly larger group attended the Monday evening meditation. 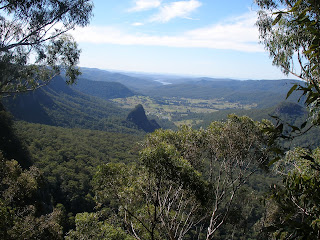 I had an exceptionally beneficial two and a half month stay at Wat Buddha Dhamma. As many people recognize, everyone's temperament is unique. And while it can be very useful when we are young to stretch ourselves beyond our personal boundaries, as we grow older we may find that we are no longer so stretchable, and that it may be more energy-efficient to settle into familiar patterns which we have found to be beneficial. Thus I have observed that a beneficial situation for myself is one where I am able conveniently to have a moderate mixture of physical exercise, mental exercise (study, reading, writing and teaching), and spiritual exercise (formal meditation practice). Every place I have visited has its benefits and limitations, but the one which has provided the right balance of all these factors is Wat Buddha Dhamma. This year the weather was superb (if slightly on the dry side), so I had the opportunity for almost daily excursions around the National Park, including two day-long trips in opposite directions along the Great North Road. The solar-powered lighting allowed me to spend many evenings studying the Pali Canon and other materials (which may coalesce into another book). And the exceptionally quiet, natural environment was very conducive to especially productive meditation.

If we add to the above mixture opportunities for both socializing and solitude, we may have a very suitable combination of situations which are favourable to a balanced approach to spiritual practice. The Buddha often referred to developing a combination of spiritual qualities to support the furthering of spiritual endeavour: for example, the Eightfold Path, the Seven Factors of Awakening, the Five Spiritual Powers, etc. Of course, each person has their own individual strengths and also weaknesses. Unfortunately, often our inherent tendency is to emphasize our strengths (which give us a sense of confidence and success), and shy away from our weaknesses (which often give us difficulty and embarrassment). However, this attitude is just playing along with the game of self – 'I' is propped up by strengths and humbled by weaknesses. Thus in the Buddhist spiritual practice of deconstructing 'I'-making, we become wary of our strengths and encouraged by our weaknesses! The Buddha's solution is to develop a careful balance of the whole range of spiritual qualities.

Also, the wisdom which is thereby generated should penetrate and be integrated in all aspects of our being. The danger of not being spiritually integrated is that one will not be 'awakened completely', not completely in tune with the way things really are. I would say that this is not even really 'spirituality', since I define 'spiritual' as 'wholeness', being in tune with the whole field of reality or truth. Being partially in tune is not too bad, but it still misses the point of spirituality and, unfortunately, has often been the source of no end of confusion, disillusionment and scandal. Thus if spirituality is not integrated into physicality, it is disembodied; if not integrated into emotionality, it is disaffected; and if not integrated into mentality, it is dissociated. All these three states are incomplete and thus cannot be encompassed in the ideal wholeness and completeness of true spirituality. I would say that the Buddha was well aware of this and hence gave the instructions for developing mindfulness in regard to body, to feeling and to mentality, in order to give rise to a balanced understanding of all these aspects of our being. 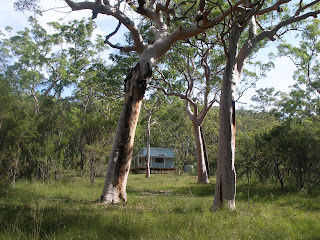 View of the Senior Monk's lodging at Wat Buddha Dhamma.

While residing at Wat Buddha Dhamma I offered most of the weekly Saturday night Dhamma talks, and also gave a short retreat on the theme: 'What is the cause of this thought?' I was studying the Buddha's teaching on Conditional Causality at that time and thought this might be a useful theme to investigate. Most people, unfortunately, do not know much about this aspect of the Buddha's teaching, so that when some challenging thought or emotion arises they immediately react to it, not realizing that most of the time that thought is simply the result of some deeper underlying issue. The teaching of the Four Noble Truths tells us that unsatisfactoriness is due to a cause and is only resolved when the cause is removed. Also, in practical terms, when we turn our attention towards the cause of our mental activity, the mental activity itself often ceases, since we are not giving it special attention. The talks I gave can be downloaded from http://www.wbd.org.au/audio/others/ There is also a video at http://www.wbd.org.au/video/

I was also at Wat Buddha Dhamma for the visits from Ajahn Dtun in March and LP Sumedho in April. These visits, and the public talks in Sydney, attracted a large number of people to the monastery, but Ajahn Khemavaro arranged the programme along the lines of a retreat format, so the atmosphere was very meditative.

My 2 ½ month stay in Australia quickly expired and I reluctantly had to make a move. Fortunately New Zealand is not too far distant, and I had an invitation from Ajahn Kusalo to visit Bodhinyanarama Monastery, where I had been resident for nearly seven years. Unfortunately, I had to pack quite a lot into my 17-day visit to Wellington, with numerous talks, chats with friends and several outings. I made a point of visiting the group in Palmerston North, where I recognized many familiar faces and noted that some regulars had moved elsewhere.

In spite of the inclement weather, a crowd of about 200 devoted supporters gathered at the monastery for the very joyful Vesak ceremony on May 22nd. Fortunately, a number of monks from Thailand and Europe have expressed their interest in spending time at Bodhinyanarama, so it appears that Ajahn Kusalo's hard work of maintaining and expanding the amazing facilities and the exceptional generosity of the lay supporters will be suitably used.

Ajahn Dhammasiha had invited me to spend some time at Dhammagiri Monastery, as he was planning on making a visit to Europe in June. However, in the end he cancelled his trip and decided to spend the month in silent retreat, as Ajahn Hasapanyo, Venerable Buripanyo and I were all resident during that . time. Dhammagiri Monastery is another place where I can continue my three kinds of exercise, although the main emphasis here is on mental exercise. The guest monk's room where I stay is equipped with a large desk and electricity, and is right beside the library. Also, many of the supporters are quite experienced and knowledgeable practitioners, who provide interesting themes for the daily Dhamma discussions.

There is the possibility for numerous walks, as the seventy acres of woodland on top of the hill where the monk's huts are located borders a Conservation Reserve and Lake Manchester Water Catchment. However, there is only one main route out of the monastery, over some fairly steep terrain, although it does afford some extensive panoramic views in all directions. Thus it isn't so easy to go for a 'gentle stroll'. In fact, it seems that many of the bush tracks are for use mainly as fire-breaks, as some of them are so unbelievably steep that it is hard to imagine any wheeled vehicle using them. 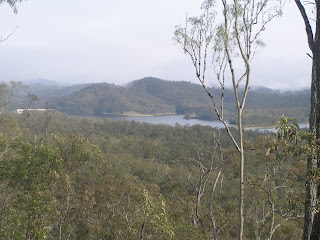 A view of Lake Manchester reservoir near Dhammagiri (on a rare drizzily day).

The reasonably quiet location is quite suitable for meditation. Most of the public activities are conducted during the first half of the day in the Dhamma Hall at the bottom of the hill, so from about 1 pm until the next morning the residents are undisturbed by visitors. Every day there is a Dhamma discussion from 11:45am to 1pm, and on Sundays there is a session of chanting, meditation and teaching from 3pm to 5pm. During my stay I gave most of the talks and meditation teachings, which can be viewed on the monastery website macrosocio-economic

I will interrupt my stay at Dhammagiri to offer another meditation day on Sunday July 3rd at Ratanagiri, John and Hanna's property in northern NSW, on the theme 'The Process of Self – Making and Un-Making – in Buddhist Perspective'. Shortly after this I will travel on to Vancouver, where after visiting family I will reside for the Rains Retreat at Birken Forest Monastery near Kamloops, British Columbia.

Wishing you all diligent and beneficial practice. 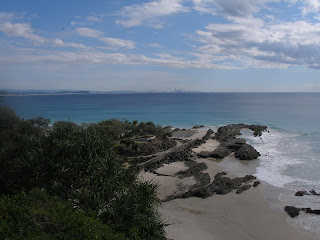 View from Colongatta northwards towards Gold Coast (the tower blocks in the distance).
Posted by Tiradhammo at 1:02 AM 2 comments: