Since returning from a six-week journey to S.E. Asia at the end of January I have been peacefully residing here at Wat Buddha Dhamma.

Following the teaching of a three-day retreat here in March, I accepted an invitation to visit with John and Hannah in northern NSW on the Tweed Coast. Over the years I have made many visits there, both visiting friends and giving some teachings. John was previously a novice here at Wat Buddha Dhamma and then ordained as a monk at Wat Pah Pong. We spent several years together at Dhammapala Monastery in Switzerland before his return to lay life and, whenever I was near Sydney, he would invite me to teach at his home or his psychology practice in North Sydney. These invitations have continued after his move to the north where he has a quiet and very scenic home on Double View Road on top of Farrants Hill. His home does indeed have 'double views' – looking to the east one can see the Pacific Ocean and the view to the west overlooks the Tweed valley overshadowed by Mt. Warning and the forested escarpment of Lamington National Park in Queensland. During this visit John and I spent a night at Bodhi Tree Monastery near Lismore, inland from the better-known 'spiritual resort' of Byron Bay. The founder and abbot, Venerable Panyavaro, has been involved with Buddhism for many years. He knew the two founders of Wat Buddha Dhamma from early on, Ayya Khema when she was a lay person with a farm in Queensland, and Phra Khantipalo when he was living in the Thai temple in Sydney. He came to Wat Buddha Dhamma at the start and eventually became a novice here. After ordination in Thailand and spending time at various forest monasteries he eventually found that he had a special appreciation for practice in the Mahasi Sayadaw tradition of Burma. He therefore styled Bodhi Tree Monastery as a retreat in that tradition and has embarked on a major development project to create a large meditation hall and accommodation for approximately 40 retreatants.

During my six-day visit to northern NSW Ajahn Dtun from Wat Boonyawat, visited Wat Buddha Dhamma and gave a series of teachings, both at the Wat and at the Buddhist Library in Sydney. He also brought two Thai monks to reside at Wat Buddha Dhamma. So I returned here to a much larger Sangha and increased activity on the Dana Hall extension.

Ajahn Suddhammo, originally from Germany, was trained as a professional carpenter so took on the task of the extension project. His knowledge and great skill soon transformed the chaotic building site into a very solid, well-insulated and attractive addition to the monastery facilities. 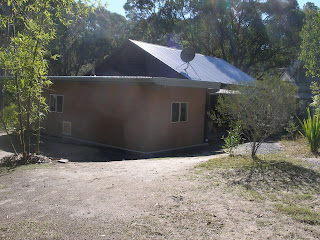 New extension on the Dining Hall.

This year Ajahn Khemavaro was travelling quite a bit so I found myself much more involved with the running of the monastery – sometimes here as the only monastic. This resulted in a particularly busy time in early July as we were making preparations for a more formal period of practice during the Rains Retreat. On a few occasions we fortunately had some helping hands. Jeff Oliver, a Dhamma teacher from the Central Coast, brought a number of students for a weekend stay at the monastery and generously engaged in some active meditation helping us clear some of the fallen branches and bark around the various dwellings as a fire break during the hot season. Following this various people helped with the never-ending collection of firewood needed over the winter which coincides here with the Rains Retreat. Even though Sydney is on the southern latitude of Los Angeles and Beirut, Lebanon, being further from the sea there are still a number of frosty mornings.

We were, however, able to fit in an excursion to Bouddhi National Park on the extreme north eastern corner of the Hawkesbury River estuary. It is the Hawkesbury River which one crosses from Wisemans Ferry to arrive at the monastery, so it was interesting to see where it flows into the Pacific Ocean. Boubbi National Park is famous for its rugged coastline and exceptional rock formations, as well as the spectacular view down the eastern coast from Barrejoey Lighthouse to Palm Beach, Manly beach and North Head, the entrance to Sydney Harbour. On a clear day it is possible to see the tops of skyscrapers of the Sydney Central Business District. 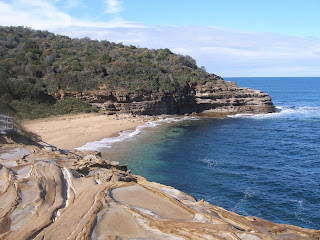 We eventually finished off most of the work activities and six monks, one anagarika and seven laity entered the Rains Retreat on July 17. Ajahn Khemavaro leads the community in a formal retreat schedule of eight hours of daily walking and sitting practice. The settling into a regular schedule now allows me time to focus more attention on the finishing up of my long-enduring book project (hopefully, then I can get on to another one!).

Wishing you all continued benefits from spiritual practice. 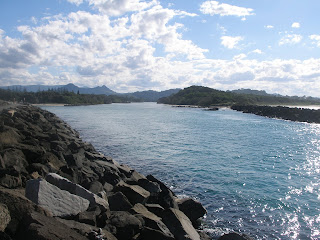